The Worst Places on Earth for HSPs

Overstimulation. Noise, chaos, bright lights, smells, crowds. These are the highly sensitive person’s kryptonite. There are some places that have overstimulation in spades, and it’s best you avoid them if you don’t want to ruin your day. Here’s my list of the WORST possible places I can imagine as an HSP.

Note: This article is a bit tongue-in-cheek.

Overstimulation to the max. A huge room full of people and flashing lights. Somehow, the beeping and dinging and electronic little tunes from the slot machines find their way into your ears from every angle. Plus, you can’t help but notice that so many of the people in a casino are elderly and alone. There is a feeling of sadness and desperation. This weighs heavily on HSPs who are attuned to the feelings of those around them.

Clubs are usually dark, people are crowded shoulder to shoulder, and music is blaring so loud that you can’t speak to anyone. There’s no stillness or calmness–no where to get away from the stimulation. How is this fun? This, the flagship Macy’s, is the very definition of overwhelming. It’s size is 2.2 million square feet (almost 205,000 square meters) and it boasts TEN FLOORS OF SHOPPING. TEN FLOORS. If you like to shop, thinking about this store probably makes your heart beat faster. As an HSP, your heart beats faster for another reason: it’s absolutely terrifying. I’ve tried, on several occasions, to shop there, because the sheer variety of goods is so impressive. There is so much stuff to look through. I just can’t look through it all….even though I really want a new pair of shoes. And it’s so very crowded. After about an hour, and going up and down countless escalators, I can’t handle it any more. I feel panicky, grumpy, and tired. Forget it. I have to leave. My entire mood is changed. Can you feel the anxiety rising just by reading this?? I can. Ugh. Hold on while I grab a book and a cup of tea. I went to Benihana recently with a group of my friends because a friend having a birthday chose it.

I would never choose Benihana.

If you aren’t familiar with it, it’s a Japanese-style steakhouse. There are many flat, table top grills throughout the huge restaurant. Diners are seated in a circle around the chef. As he cooks everyone’s food, he does tricks and funny antics. This same routine is going on, concurrently, at numerous tables throughout the restaurant.

It’s a giant room packed with people. There’s smoke in the air from the cooking, which made my eyes feel dry. There’s a lot of ambient noise, plus, the chefs hit their metal spatulas on the grill all the time as part of their routine. CLANG CLANG CLANG. It’s so loud that I had to cover my ears. I’m sorry, but I hate Benihana. It’s sensory overload. 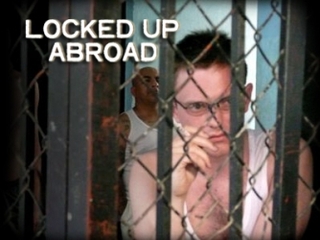 Ok, ok, obviously no one wants to go to prison.

But on the show Locked Up Abroad (aka Banged up Abroad outside the US), when they show the narrator’s character in some Turkish/Ecuadorian/Thai prison, I’m thinking something like, “Ugh, I could NOT handle prison because I would not be able to stand having SO MANY PEOPLE around me ALL the time.”

Just watching the mock footage of jail cells packed full of people makes me feel like I can’t breathe. Can you imagine being stuck in a tiny, dirty, hot cell with several other people, all day, every day? It’s like an extra added terribleness for an HSP or introvert who has the misfortune to find themselves in a third-world prison. Don’t sell drugs, kids.
HSP triggers: